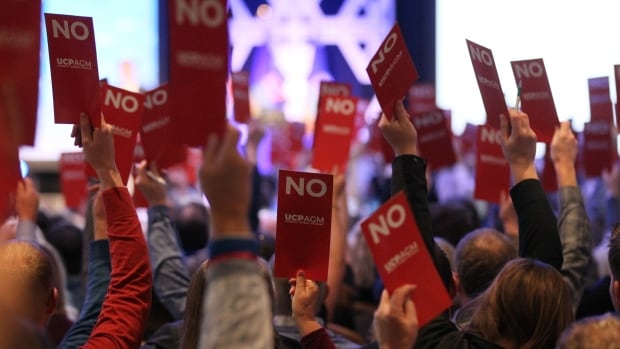 A senior member of the United Conservative Party who has publicly called for the resignation of Alberta’s Prime Minister Jason Kenney has been removed from his position as vice president and director of the party.

“The board of directors of the United Conservative Party removed me as vice president of politics and administration and as director. So, yeah, they fired me, ”Joel Mullan told CBC News on Tuesday.

The vote cited a breach of confidentiality based on Mullan speaking to the media last week about his calls for a board meeting to discuss a review of leadership, an argument Mullan claims not to accept.

“If I’ve decided to bring an issue to the board, I think it’s up to me whether I want to share it or not. And I don’t see that as a breach of confidentiality,” he said.

“I made myself very clear as a private person, not as a representative of the board of directors.”

Dave Prisco, the party’s communications director, confirmed that Mullan had been dismissed for violating the UCP’s code of conduct and confidentiality agreement.

“These standards were created by our democratically elected board to ensure that everyone involved in these positions can speak freely at meetings without fear of their comments being made public,” Prisco said in a statement.

“It is perfectly clear that Mr. Mullan did not live up to that standard.”

At a caucus meeting on September 22nd, there was no expected revolt against Kenney’s leadership. Instead, the meeting ended with a plan for the party’s annual general meeting in the spring and the planned review of the leadership at that time.

Mullan said 10 of the UCP’s 22 constituency assemblies have filed motions calling for a review by March 1, and others are expected to discuss the matter.

He said the decision to overthrow him is a strong signal that the party has become increasingly disconnected from its grassroots.

“The grassroots are in charge and are absolutely paramount in the party. As long as it is convenient,” he said.

Mullan, who lives in Edmonton, said he has no regrets and no intention of leaving the party.

However, he is worried about his future.

“I believe that it has started to get lost, that we have ineffective leadership, and that we may have some dark days ahead of us if we don’t listen to our grassroots members again,” he said.

“It won’t be a happy place, that’s for sure. As for the form, I’m not sure at the moment. But there will be another division, I have no doubt about that.”