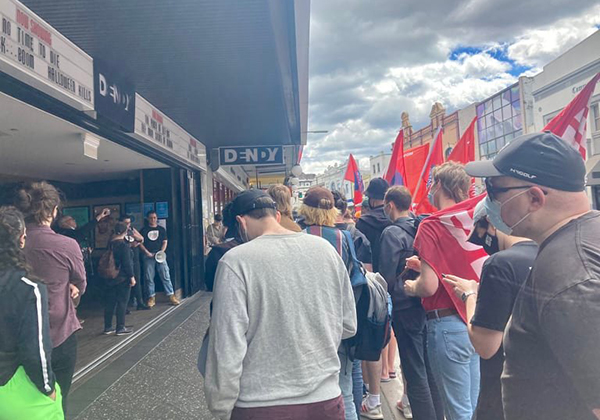 Protesters and trade unionists gathered outside the Better Read Than Dead (BRTD) bookstore on King Street this morning to show solidarity with BRTD workers in their ongoing struggle for fair working conditions and wages. BRTD employees’ non-strike action follows news that management has failed to adhere to the groundbreaking agreement in principle made more than three months ago.

The deal, notable as the first bookstore EBA deal in Australia, was reached in July after nine days of industrial action. In the past few months there have been delays and blockades from management, which is now refusing to comply with the agreement on parental leave, job security, full Sunday tariffs and the end of junior tariffs.

The event was attended by members of the Retail and Fast Food Union (RAFFWU), the United Workers Union (UWU), the Maritime Union of Australia (MUA) and the Australian Unemployment Union (AUWU). When the protest took place outside the store, BRTD workers began reintroducing industrial action by banning overtime, online ordering, cash processing, picking of returns and window displays. This new implementation was chosen on Wednesday by the RAFFWU members at the BRTD.

Lucas, a RAFFWU organizer, chaired the rally and stated that BRTD lawyers had informed RAFFWU that they would not honor their agreement. Emma, ​​a bookstore clerk and member of RAFFWU, spoke about the store still lacks sexual harassment policies and the harassment workers have suffered under management. “We have always been willing to negotiate, but that is completely outrageous and we will not make any concessions on these fronts,” said Emma of management’s decision to revoke the agreement.

June, another RAFFWU organizer, read expressions of solidarity from comrades and bookstore workers in Melbourne and criticized the progressive demeanor of bosses who refuse to take progressive measures on wages and working conditions.

“There is a deep understanding that each of us is connected in these struggles and that the actions of the Better Read Than Dead workers improve not only lives and conditions in their workplace, but in all workplaces. This is a fight that we share. “

Luca, a former BRTD worker, spoke about how workers endured threats of layoffs by management, threats of defamation by lawyers, and general abuse before being fired “without ceremony” during the industrial action about six months ago.

The rally ended with applause for individual BRTD workers in the crowd before the groups split up to fly up and down King Street and the Newtown area.

The MUA organizer Shane Reside expressed its solidarity with the BRTD employees in their struggle and said: “[w]it is not extraordinary that there should be [sic] Fashion companies that exploit their workers. I find that unusual for [BRTD] There is a group of workers who are ready to join their union and take collective action on it. “