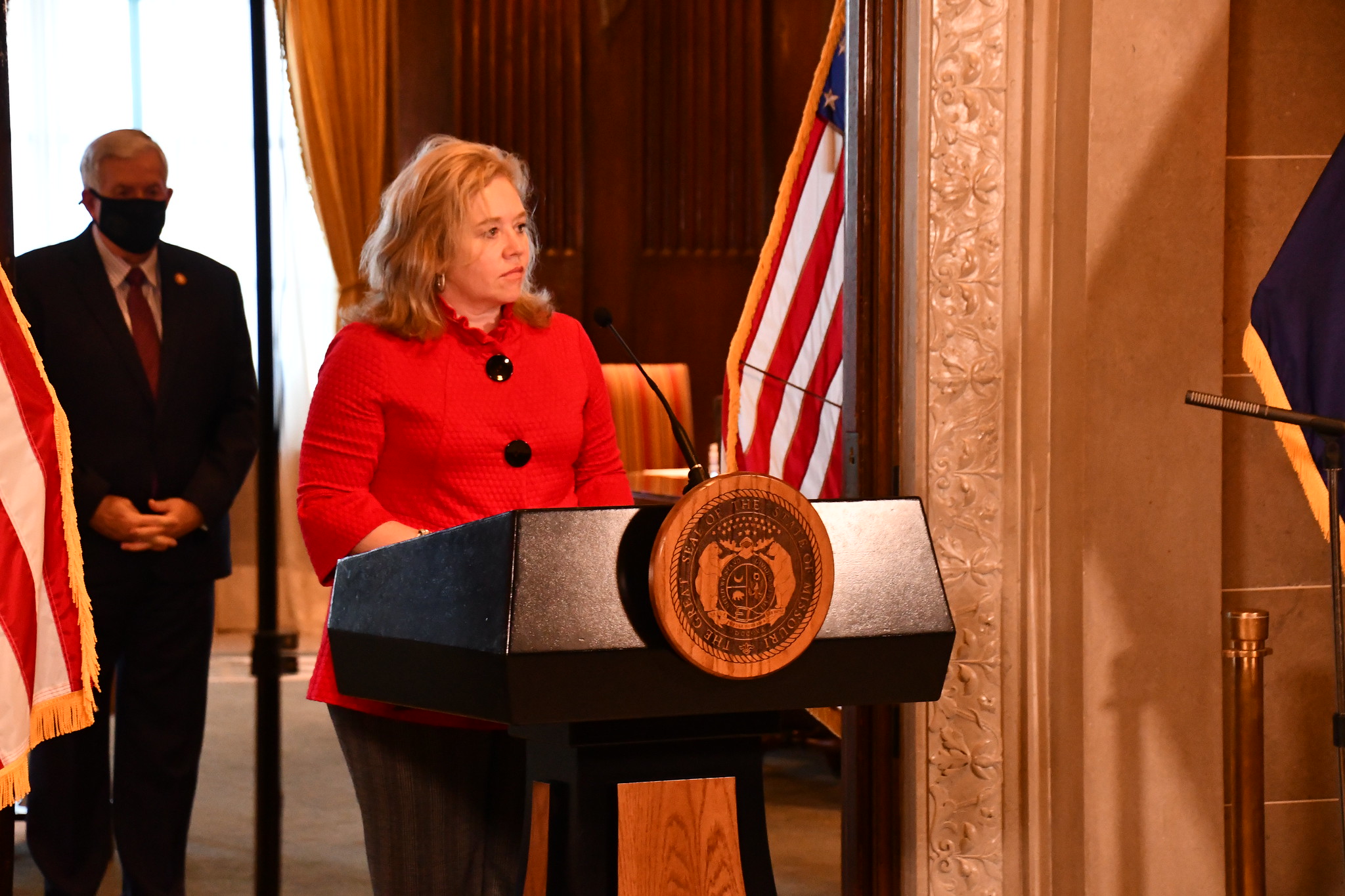 After years of dysfunction and criticism – including lawsuits, legal inquiries, and a revolving door from leaders – Tuesday’s announcement that Governor Mike Parson will appoint one of his senior deputies to run the Missouri Department of Social Affairs was met with optimism.

Jennifer Tidball, the division’s acting director for the past two years and the focus of contempt for many state lawmakers, will step down on Monday and be replaced by Robert Knodell, the governor’s deputy chief of staff.

During her tenure, the department was under review for handling reports of abuse and neglect in unlicensed youth housing facilities, anger for failing to report missing foster children to law enforcement, and was ordered by the courts to implement the voter-approved Medicaid extension .

“I expect change. And if there is no change in their behavior within the department, “said Hannah Kelly, R-Mountain View, of Tidball,” I will not hesitate to express my disappointment about it. “

But even with a new deputy director, Tidball will remain the agency’s chief operating officer. The frequent fluctuation in other management positions and the low employee morale will not diminish in the foreseeable future.

there were eight directors of the children’s department – overseeing child welfare services such as foster families – for the past decade. The department is currently headed by an interim director, Joanie Rogers, who started in September 2020.

Amid the dispute over the expansion of Medicaid in court and the subsequent implementation of the Medicaid program in Missouri was looked after by a theater director from the spring until its director, Todd Richardson, returned from an extended leave of absence on October 1st.

And the social department as a whole has not had a permanent director since 2019 after the resignation of former director Steve Corsi. Since her appointment by Parson in May 2019, Tidball has been serving in her second role as Deputy Director.

“Frankly, I think we have an agency in need,” said Kelly Schultz, director of the Office of Child Advocate, at a legislature hearing last week.

“Leadership from top to bottom”

What began last year as a legislative investigation into the ministry’s inaction in response to reports of abuse and neglect at unlicensed boarding schools has grown over the course of subsequent hearings and has addressed a number of issues within the ministry.

At many of these hearings, the agency representative who was brought before the legislature was Tidball, who has been with the department since 1995.

“While she may no longer be the public face before hearings, I think Jennifer will retain a lot of leadership as she has done for many years,” said Jessica Seitz, executive director of Missouri KidsFirst, an advocacy group that works to protect children from abuse and neglect.

Kelly, chair of the Joint Committee on Child Abuse and Neglect, said she hoped for improved communication with lawmakers and “accountability without excuses” from the department’s closest executives.

Shortly before a legislative hearing last month, MP Dottie Bailey, R-Eureka, made it even clearer about the need for change.

“We are in such dire straits for the children that we need top-down leadership,” said Bailey.

Although Tidball has served as the deputy director since 2019, he was never ratified by the Senate. In order to force a confirmation, the legislature has included a wording in this year’s budget that would have required that the DSS director “is confirmed by the Senate to hold the office” in order to pay his salary.

Parson vetoed this language and wrote in his veto letter that it “undermines the constitutional authority of the executive branch to appoint and compensate department heads”.

Rep. Jered Taylor, R-Nixa and chairman of the House of Representatives Special Committee on Government Oversight that has been reviewing DSS, said lawmakers could propose laws at that upcoming session that require confirmation from an incumbent division head by a specified date.

“I think that’s important,” Taylor said before a hearing at DSS last month.

Hope for a next director 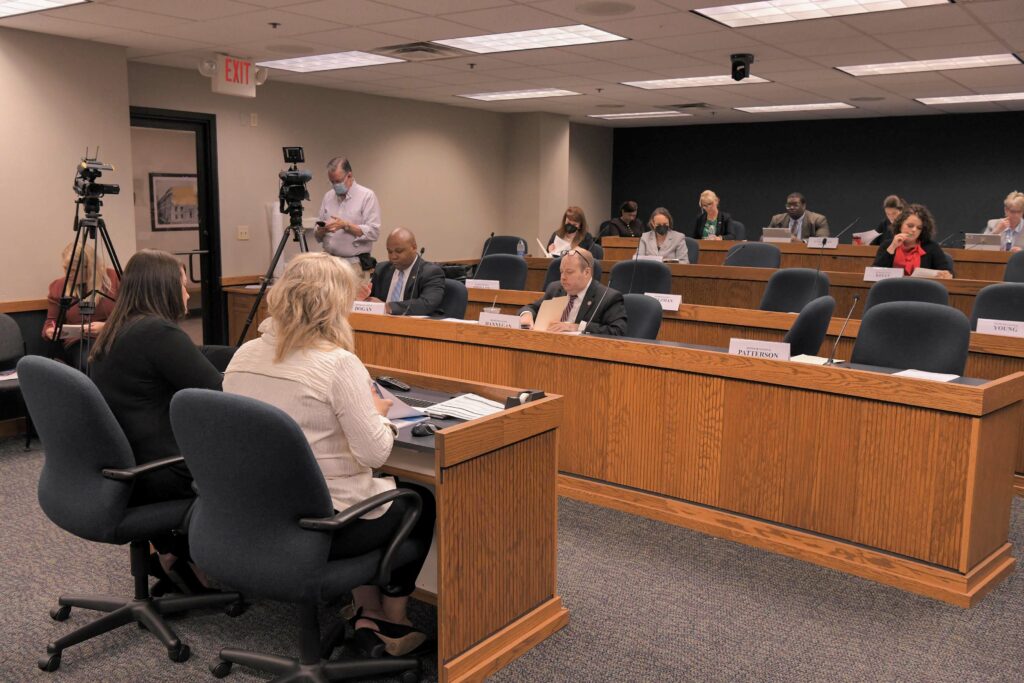 Legislators playing a oversight role over DSS expressed hope last month that a new director would help put the ship in order. Many agreed that someone with firsthand experience in the field would be ideal.

Rep. Scott Cupps, R-Shell Knob, said last month a director who can be an effective manager and “shake things up” is needed. But he would also like to see this connected to someone who is enthusiastic about the agency’s mission to avoid “going through the same dog and pony show again”.

Crystal Quade, House Minority Leader, D-Springfield, has said too often that these types of political appointments are “people who are simply given these roles who do not have the experience or knowledge to do the best.”

“And I feel that when you deal with child abuse and neglect,” she said, “you need someone trained to run the department.”

Lawmakers also advised tapping into someone who has worked their way up the ranks of the department to run it.

“I don’t want a bureaucrat. I don’t want a “yes” person. I don’t want anyone whose family donated to the governor’s campaign or whatever for the appointment, ”said Rep. Raychel Proudie, D-Ferguson, last month. “I want to know that the person who will run this department has done the job they ask of their staff.”

Taylor said selecting one inside person to “be there with them and fight” could help build trust among the department’s staff.

Legislators this year have voiced their outrage at the DSS leadership that department staff have been told they cannot discuss issues with their lawmakers. The department has said employees can speak to lawmakers, but this has to be at their own time and speak about their personal experiences – and not on behalf of the department. 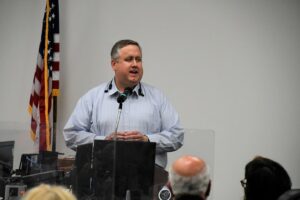 Robert Knodell, acting director of the Missouri Department of Health, speaks to a group of government officials on May 24, 2021 (photo courtesy of the Missouri Governor’s Office).

It is unclear when a permanent director will be appointed and whether Knodell will be available for the position. According to Tuesday’s press release, Knodell will step down from his post on October 17 before taking up his position at DSS.

There was no mention of Knodell’s resignation before serving as deputy director of the Department of Health and Senior Services following the sudden resignation of former Director Randall Williams in April.

The spokeswoman for the DSS and the governor’s office on Tuesday did not respond to inquiries confirming the search for a permanent director. Knodell was not immediately available for comment on Wednesday.

Staff shortages and low pay have long plagued the agency across departments ranging from child molestation investigators to the Medicaid program in Missouri to safety net programs like grocery stamps.

Seitz said she wanted a permanent director of the children’s department, which is “even more of a revolving door”. Ultimately, she would like to see reinvestment in the department’s workforce.

“If we don’t invest in the frontline people who we expect to implement these plans, I don’t know how effective they will be,” said Seitz.

The Department faced with deep budget cuts and Workforce under former Democratic Governor Jay Nixon, which was continued under his successors. The Department of Social Services had some of the highest turnover rates in 2014. according to a St. Louis post-dispatch analysis by the executive agencies at the time.

In response to household deductions as a result of the pandemic last July approx. 200 department employees were laid off.

Under Parson’s vetoes earlier this year, $ 2.1 million was earmarked for a three percent increase for child clerks – a position lawmakers hoped would address the high turnover in the department.

Meanwhile, this year the department said it would take two months to implement the Medicaid extension after a court order was received due in part to staff shortages.

Six years ago, a March 2015 exam found that MO HealthNet failed to recover funds from thousands of deceased Medicaid attendees, costing the state more than $ 27 million that it could have recovered. Among the reasons the department gave for failure there was a lack of sufficient staff to deal with cases in a timely manner.

Until the establishment of the Office of Childhood that year, the Department of Social Services also oversaw the state Childcare support program, which supports eligible low-income families and foster children through a tiered payment system.

Amid the pandemic, child carers reported months of delays that amounted to tens of thousands of dollars in payments. At the end of October there was a backlog of 5,339 outstanding payment processing requests, according to emails The Independent received through an open request this exposed the frustrations of the providers.

Time to fill the climate action leadership void ourselves

What is personal cash flow management?

Leadership RI gets $1.75M grant to expand diversity of participants